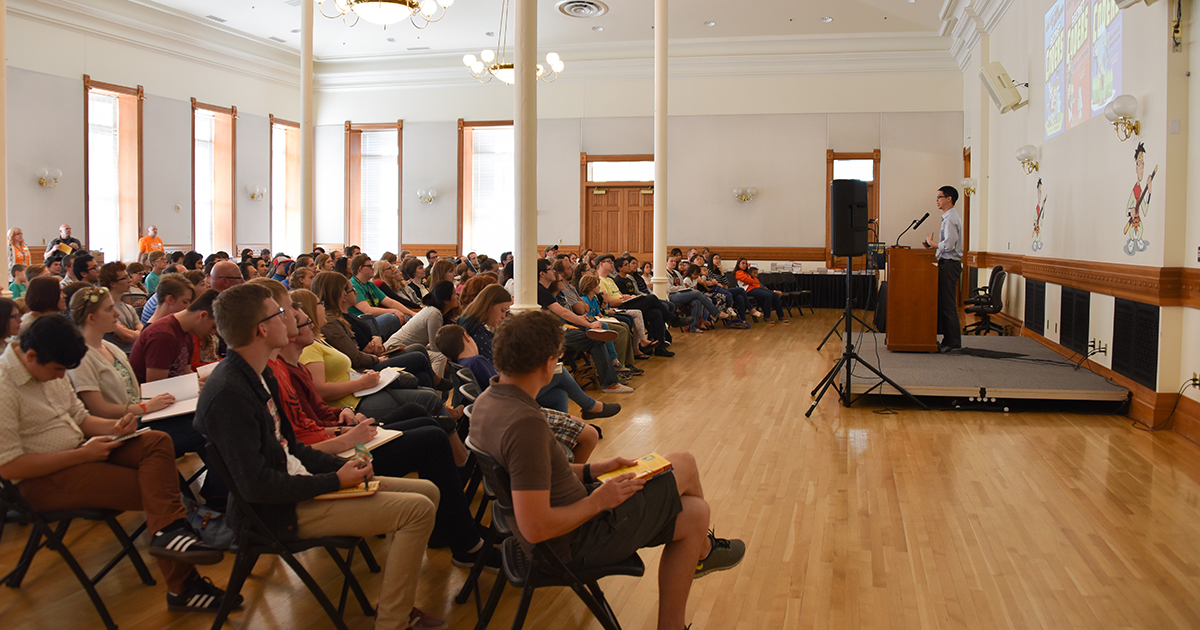 On the second day of our Get Graphic! Festival,  we started thinking about how to be a cartoonist. Artists like Gene Luen Yang, (AMERICAN BORN CHINESE), Jess Smart Smiley (UPSIDE DOWN: A VAMPIRE TALE), and Jake Parker (MISSILE MOUSE) held workshops on the process of making a comic. These are 7 things we learned:

1. Yang suggested having ideas rooted in what you know. In his first comic, GORDON YAMAMOTO AND THE KING OF THE GEEKS, he tells the story of a young man with a spaceship stuck up his nose.   “This is from my life. I have never had a spaceship stuck up my nose, but I have had a lifelong struggle with sinus issues,” said Yang. “The problem with sinus issues is that it’s never anyone’s fault. But one day I began thinking, what if it was somebody’s fault? What if there was something sentient plugging up my nose?”

2. The characters an artist draws and even the artist’s own artistic style change as they are drawing. To overcome this, Yang says that he draws his characters over and over again till they stop changing.

4. Smiley taught us that the job of a panel in a comic is not only to tell a piece of a story but also to get you to read the next part.

5. The power of symbolism changes our ideas. Because comics tell stories with words and images, these two types of communication converge to tell a story in a way that is unique to the genre.

7. According to Parker, the most important thing to remember about making comics is clarity. He would sacrifice an awesome picture for a better understanding of what’s going on.