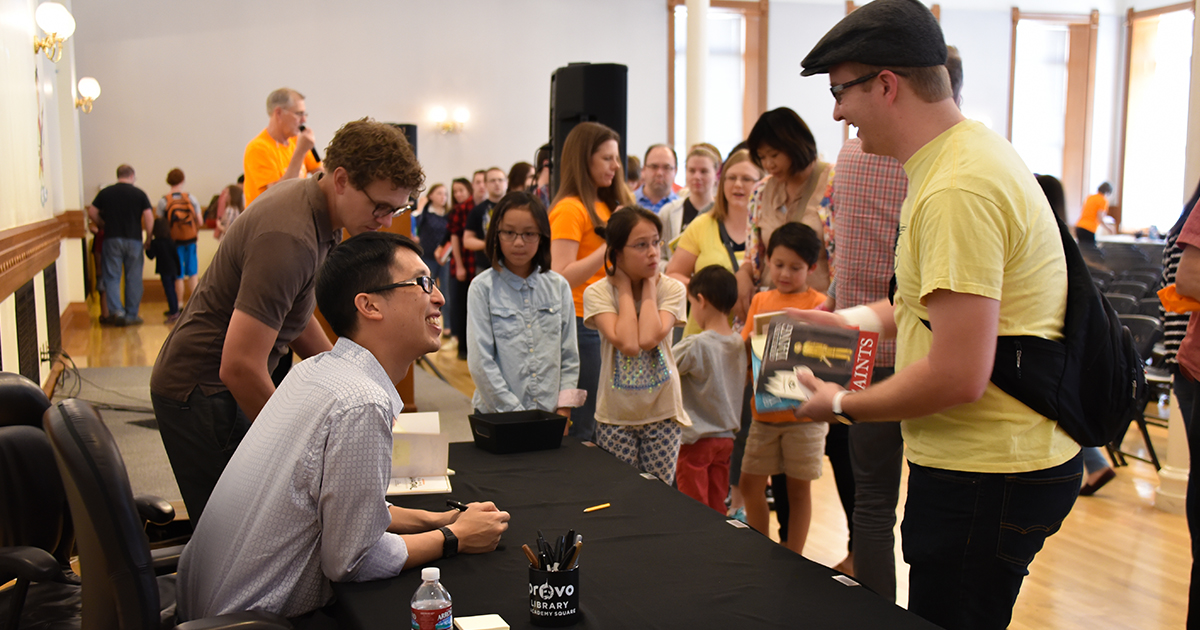 On Friday, September 16 we kicked off our first ever, annual Graphic Novel Festival: Get Graphic. Our keynote speaker, Gene Luen Yang, comic book author and the National Ambassador for Young People’s Literature (appointed by the Library of Congress, Every Child A Reader, and the Children’s Book Council), explained the educational value of comic books.

As the son of immigrant parents, Yang says he grew up in a house full of stories.

“Immigrant parents tells stories to their children as a way of connecting them to the culture that they left,” says Yang. “I grew up telling stories, and I also grew up drawing.”

As a child, Yang fell in love with cartoons because they proved that you could use drawings to tell a story. He dreamed of one day becoming a Disney animator. When Yang discovered a Marvel comic book, that all changed and soon he grew from comic book reader to comic book creator. 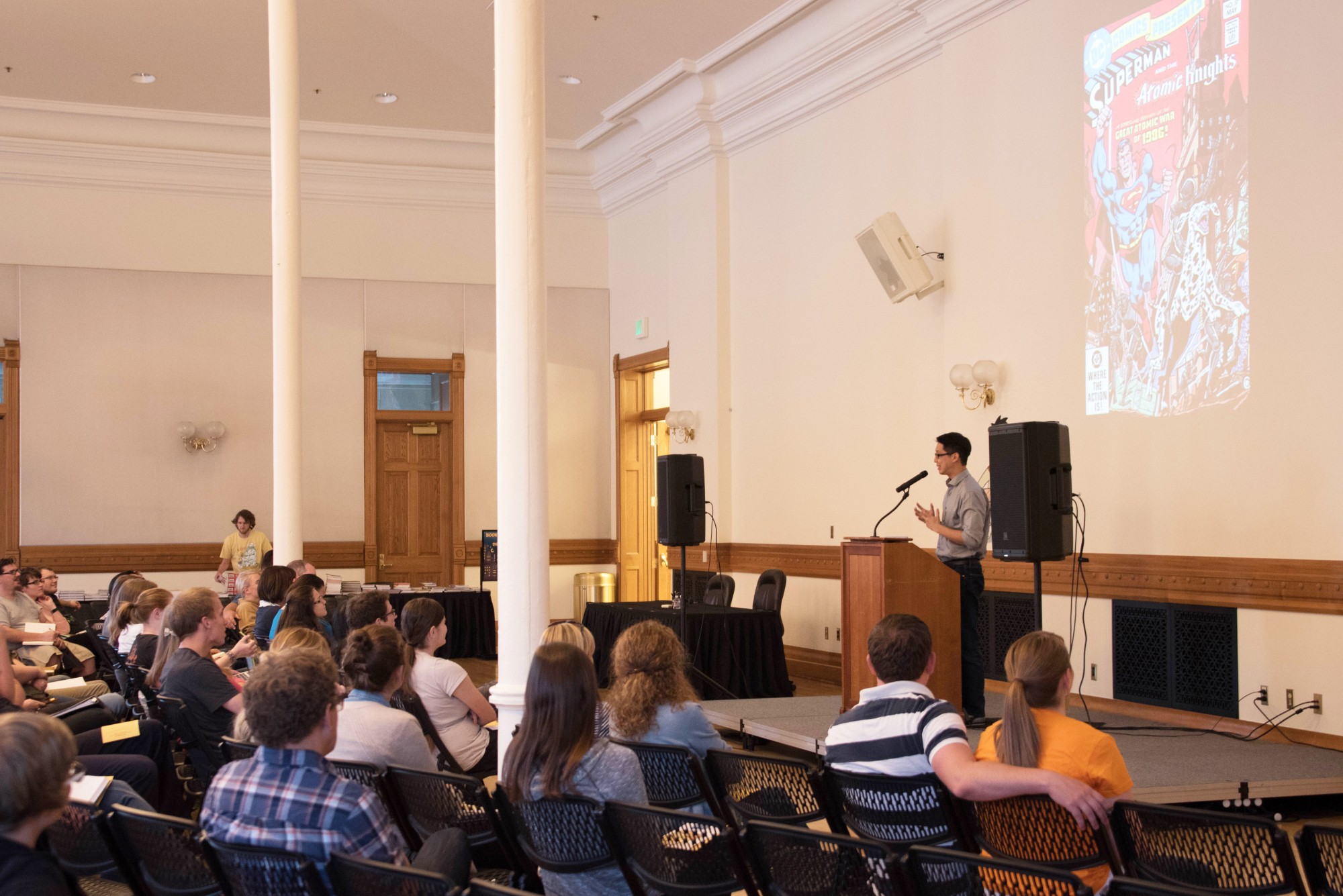 “One of my favorite things about comic books is that the dividing line between who’s a fan and who’s a creator is really thin,” says Yang. “If you want to become a comic book creator all you need are some pens, some paper and maybe like a healthy ignorance of your own artistic limitations.”

Even though Yang’s been creating comics for a long time, he’s only been at it full time for about a year and a half. Before that, he was also a high school teacher, and he would bring up comics with his students hoping to seem cool—it didn’t work. As a high school teacher, he often felt like Batman, living with two separate identities, keeping his comic and his teaching life separate.

However, comics began to take on a more pivotal role in his life when one day he needed a substitute teacher. His first solution was to videotape lectures, which he describes as an utter disaster.

“Mr. Yang we thought you were boring in person, but on video, you are just unbearable,” said his students.

In a desperate second attempt, Yang drew his lectures as comics. To his surprise, they were a hit and a preferred means to Yang in person. 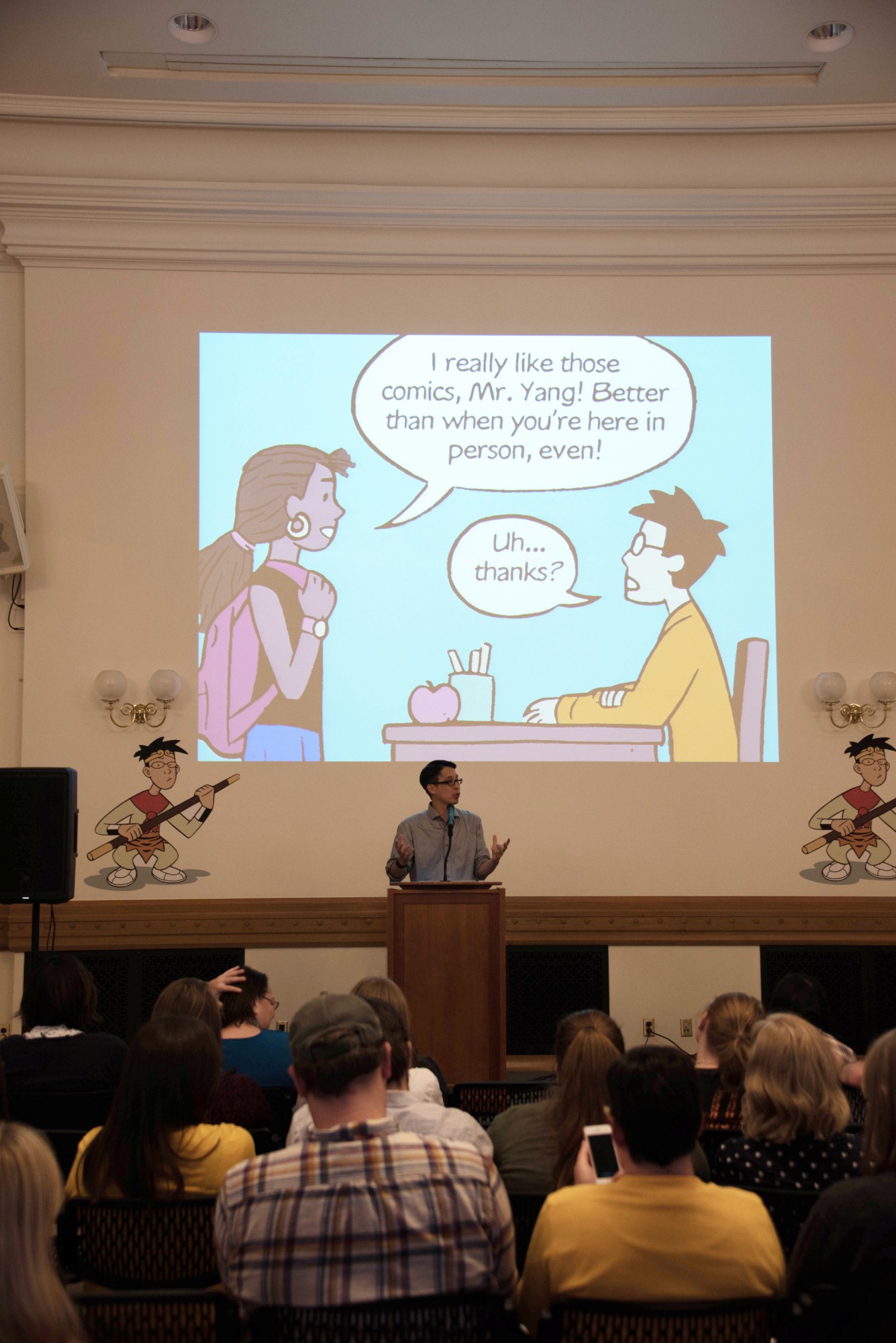 Surprised that a generation that grew up with screens would prefer reading lectures on a page over a screen, he looked into why comics were working.

He found that comics in the classroom was not such a novel idea. Comics have been used all over the world for nearly a century in classrooms all around the world. He realized that comics as a single, unified, multimedia experience give the reader complete control of information transfer rather than the creator.

“When I was giving them the comic lectures it was like I was giving them a remote control. If they didn’t understand something in my lecture, they could just read it again, or go more slowly. If I was talking about something they already understood, they could skip over it,” says Yang. “That’s only true of comics. That’s the only visual narrative medium that has that quality.”

Comics have as much a place in the classroom as a book because, for many reluctant readers, comics lead to a love of reading.

After addressing this audience of parents and educators, Yang signed books; on Saturday, he offered a keynote address especially for those hoping to make comics. Look for that recap next week!