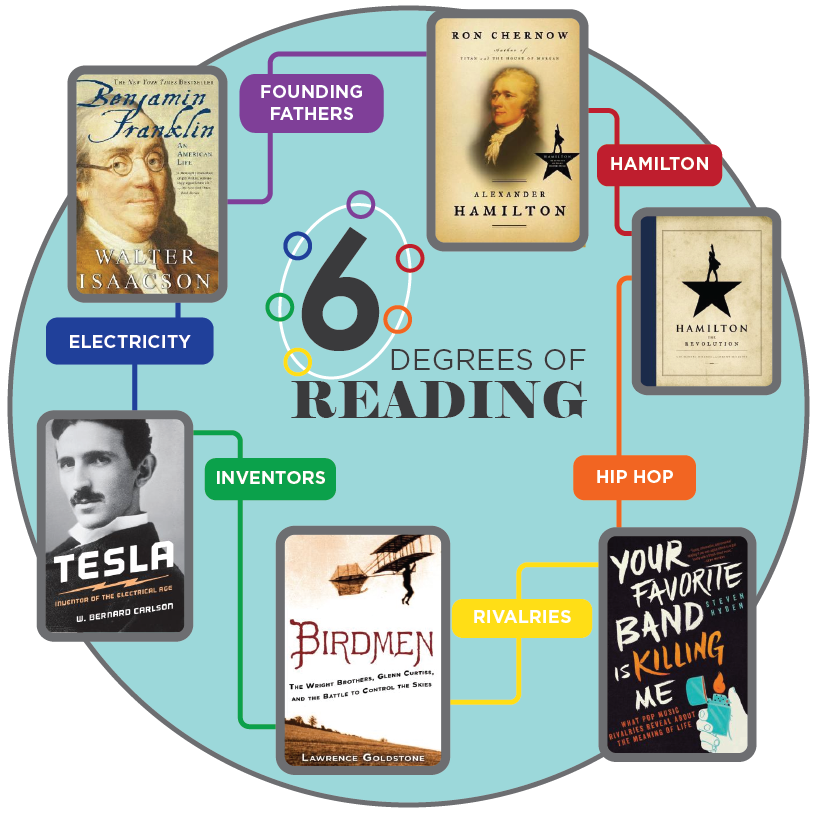 This week, history and hip hop collide, and it's electric! (see what I did there?)

The book the hit Broadway musical was based on. Until recently Alexander Hamilton was not as well esteemed and avidly written about like the other gifted men of his time. However, Chernow makes the case that Hamilton should be considered one of the most important Founding Fathers arguing that without his financial brilliance and creation of public finance, the United States might not have survived beyond the first few years.

HAMILTON: THE REVOLUTION
by Lin-Manuel Miranda
(2016)

This book takes readers behind the scenes of the new Broadway hit musical based on the life of Founding Father, Alexander Hamilton. Mixing a variety of musical styles including hip-hop, pop, R&B, and musical theater, the story gives insight into Hamilton's life, the Revolutionary war, and the early American time period.

YOUR FAVORITE BAND IS KILLING ME: WHAT POP MUSIC RIVALRIES REVEAL ABOUT THE MEANING OF LIFE
by Steven Hyden
(2016)

At some point, we've all argued why we prefer one band over another from their lyrics to antics off the stage. Author Steven Hyden uses 19 different band rivalries from the famous Beatles/Rolling Stones competition to hip-hop artists, Biggie vs. Tupac and what deeper truths we can learn from these rivalries.

BIRDMEN: THE WRIGHT BROTHERS, GLENN CURTISS, AND THE BATTLE TO CONTROL THE SKIES
by Lawrence Goldstone
(2014)

An interesting exploration of the rivalry between the Wright brothers and Glenn Hammond Curtiss to be the first to invent a machine capable of sustained flight. Goldstone takes readers through their design innovations, false starts, and dreams of the ultimate prize which was finally captured by Wilbur and Orville Wright.

TESLA: INVENTOR OF THE ELECTRICAL AGE
by W. Bernard Carlson
(2013)

When you think of inventions using electricity, Thomas Edison is more widely known than the eccentric Nicola Tesla. In his book, however, author W. Bernard Carlson, sheds light on the Tesla, his inventions, and his many successes and failures. This book looks at the what, how, and why he was motivated to invent.

This book traces the life of one of America's great Founding Fathers, Benjamin Franklin. Franklin was a man of a variety of interests many of which have been woven into our American heritage. From his early days as a printer to scientist, inventor, and politician, Benjamin Franklin was one of the most accomplished men of his age. The book even covers his interest in the power of electricity and his experimentation done with lightning to determine if they were the same.