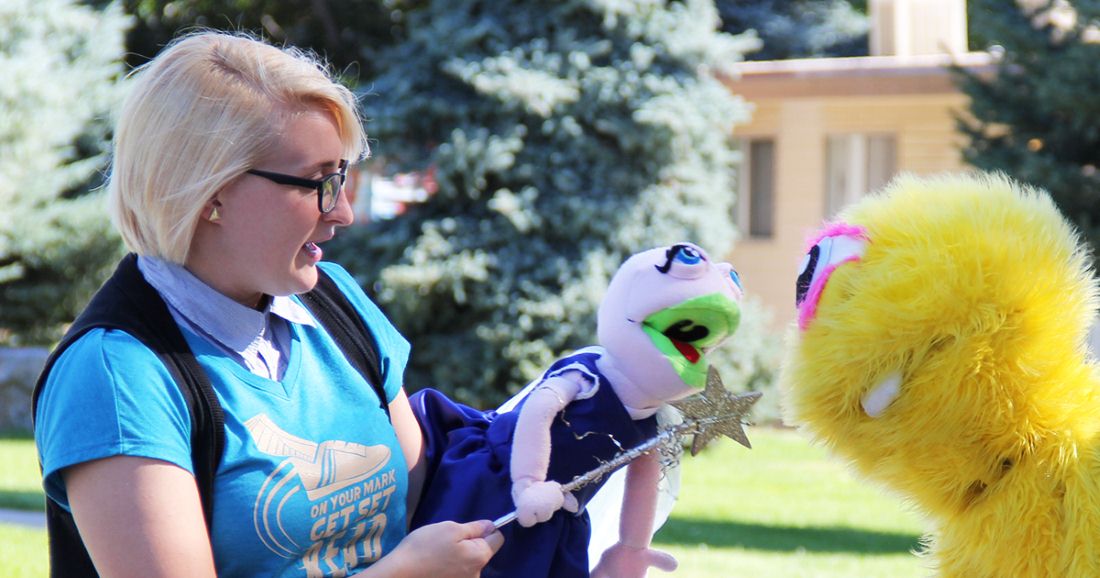 There’s a lot more to the Library than checking out books—and that means there’s a lot more to working here, too! Over the next few weeks, we'll be posting interviews with some of our Children’s staff to learn more about what it’s like to work here.

Up first is Tori Pence, one of our storytellers:

So you're a storyteller at the Library. What does that actually mean?

Well, I get to sing songs and dance around and be a goof. But for real, it means providing an opportunity for children to come to love books and reading! It means staring at a computer screen pulling your hair out, spending hours trying to prep a 20 minute show. It means small hugs around your legs and being told you're loved. It means party times fun times with books!

How long have you been doing this?

I've worked at Provo Library for two years as a storyteller, but I've been performing elsewhere for the better part of forever. I've volunteered at libraries since I was a kid.

What experiences helped you prepare for this job?

Being the Easter Bunny, true story. I was the Easter Bunny for my city for ten years until I turned 21 and came to Utah. Day in and out for one month a year I had kids put on my lap screaming and crying and had to figure out how to communicate with them through a fiberglass head without speaking. I was also peed on. Twice.

You're also a Famous Local Comedian. Has your background in sketch and improv helped with storytelling?

Sketch has helped me immensely! Prepping a story time is pretty much like writing a sketch, especially the puppet show portion. It helps to know the basics of comedy, about what makes a show fun when you're writing a show. You want to teach, but no one is going to listen if it's not fun...Improv is super important as well, especially in the summer story time with older kids who want to chat. Kids are gonna say some weird stuff—which can throw off your groove— so it helps to be able to think on your toes, take what they say, and integrate it into your story time. Also, your kids are not bringing themselves to story time, their parents are. You have to amuse them too so they'll pay attention and engage with their kids, and knowing how to write for an older audience was super helpful for that.

Reversal: has storytelling helped with your comedy?

I have to write a story time show a week in the regular year and two a week during the summer. Having such a short amount of time forces you to streamline your process and be constantly thinking of ideas; it keeps my mind fresh and constantly creating. . .I actually have a sketch that was inspired by a real life story time, and it's one of my favs.

What's the instance in which you've committed the most to your storytelling act (costumes, props, puppets, embarrassing voices, etc)?

One time I jogged in with gym shorts and sweat bands carrying a fake Olympic torch and ran around the room until I stumbled to the floor onto my face and "passed out.”

Your last day here is coming up soon. Any advice for your replacement?

Have a party! It is all about the chilluns, and if you aren't having fun then chances are that they aren't having fun either. Story time is so important— you’re creating some of these kids' most positive experiences with books, so make them awesome!