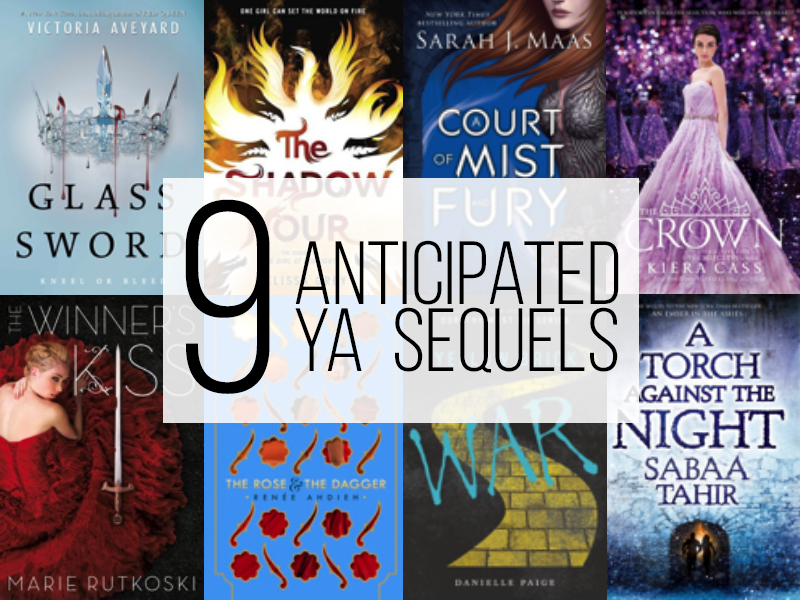 The pain is familiar to you: you pick up that book you've been hearing so much about, devour its contents, and then get to the last page only to discover that there is a SEQUEL planned, which means that instead of wrapping everything up nicely there are cliffhangers that will just leave you dangling, waiting and waiting and WAITING until the next book is published (a year later?! What makes publishers think we have this kind of patience?). For these 9 series, 2016 means that your wait is (at least temporarily) over!

This is the second book in the RED QUEEN trilogy, which opened up at No. 1 on the New York Times bestseller list in 2015. Universal Pictures has already acquired the film rights so you know this one will be a popular read. It continues with the heroine Mare Barrow running for her life as she deals with her own personal darkness and the growing rebel uprising. A captivating fantasy full of action packed drama, romance, and all the fun of dystopian fiction.

The third and final book in the sci-fi apocalyptic 5TH WAVE series is finally here. This epic conclusion will determine the fate of planet Earth in a wildly entertaining page turner. This too has a film planned starring Chloe Grace Moretz and Nick Robinson.

THE ROSE AND THE DAGGER
by Renee Ahdieh
Release date: May 3rd, 2016

Inspired by the classic Arabian Nights this is the followup to THE WRATH AND THE DAWN (2015).  Protagonist Shahrzad is torn between loyalties to those she loves but she determines to not be a pawn in the schemes and takes matters into her own hands as she learns to harness her powers. This lush and fast-paced novel keeps you intrigued with curses, subplots, romance and a culturally diverse setting.

This sequel to A COURT OF THORNS AND ROSES, tells of Fayre as the High Fae in the Night Court and the twisted politics, power and passions between good and evil therein. This seductive, action packed fantasy is sure to please fans.

A TORCH AGAINST THE NIGHT
by Sabaa Tahir
Release date: August 30th, 2016

Number two of AN EMBER IN THE ASHES, picks up where the previous ended with adventures and journeys fighting against the evil in the empire. Laia and Elias struggle to free her brother from prison in the north; meanwhile in the city of Serra, Helene Aquilla must juggle loyalty, love and power around the twisted leader Marcus.

Cass’s fifth and the SELECTION series finale picks up with Eadlyn and her 35 suitors-dilemma as she realizes that she won’t be happy to remain alone. Eadlyn doesn’t believe that she can have the happily ever after fairytale that her parents were blessed with but the heart has a way of surprising you and Eadlyn is forced to make an important choice. Romantic, fast paced and engaging, this novel will wrap up the series in a satisfying way.

Book number two of the GIRL AT MIDNIGHT series, Grey writes a world-building, urban fantasy continuing the story of Echo, the firebird--a creature of light that is said to bring peace. Echo has already overcome many losses but must struggle with dangers near and far, as well as learn to use her own powers.

Number three of the best-selling DOROTHY MUST DIE series tells of Amy Gumm’s mission to take down the evil dictator of Oz and Kansas--the not-so-sweet Dorothy Gale. Amy joins forces with the Revolutionary order of the Wicked to finally defeat her in this dark and gruesome tale full of magic, suspense and action.

This final book in THE WINNER’S trilogy is complex and suspenseful as Arin believes the worst in Kestrel’s past behavior while she is in fact prisoner in a war camp. The war between East and West escalates as this fantasy tale unfolds, revealing the true nature of the characters and their love.