Details
Written by Breanne
Published: 19 May 2016

It's there, in your closet: a shoebox full of old audio cassettes. In your storage room: a box of VHS tapes. You haven't even had a working VHS player for at least 5 years. But in those boxes are a hodge podge of silly things you recorded from radio and TV in the 90s, notes to yourself you thought you were going to listen to later, and most importantly, moments from your life with your friends and your family that you can't just throw out.

I understand! I have these boxes, too. So you can imagine how thrilled I was when I found out our library was going to get media transfer devices, and that anyone could use them for free! We have devices available for audio cassettes, LPs, VHS tapes, and even a photo scanner. These devices record the orignal material as it is played and then sends it to the computer in a digital format, so you can save it to a thumb drive or even upload things to the internet. 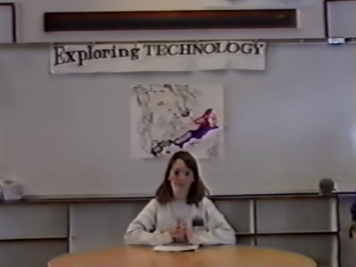 I've already brought in several audio cassettes and VHS tapes (starting to unload those boxes I thought I could never get rid of), and tried out the digital transfer devices. Everything worked perfectly, and it was a lot simpler than I was expecting. I've also been amazed (and amused) at the things I've been finding on these devices. The sounds of my sisters playing piano in our house as we grew up, reports I did in school as a kid (seen to the left here), even just the sound of my own voice from those years is crazy to hear.

Come in and preserve your memories with our media center devices (and also clear out some valuable closet space)! You can make a reservation to use the equipment by calling 801-852-7681.