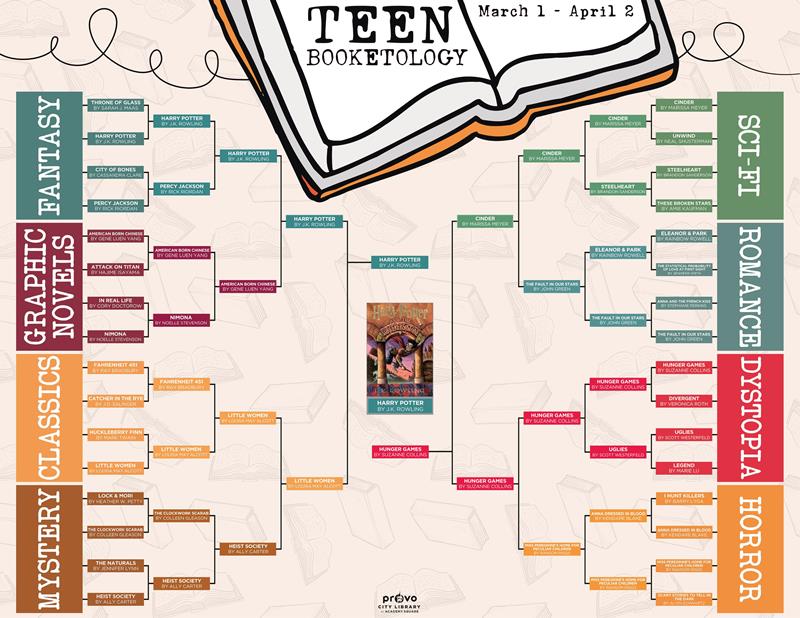 The madness of March has ended, and with it so did Teen Booketology. Harry Potter reigned supreme, but I can’t say I was entirely surprised. That being said, I was fascinated to see the results every week. Who won their match by a landslide, and who tied (it happened twice!)? I thought you might find it interesting too. Here’s a breakdown of each week’s results.

The biggest victory was in horror novels with MISS PEREGRINE’S HOME FOR PECULIAR CHILDREN (86%) against SCARY STORIES TO TELL IN THE DARK (14%). The closest match was between the graphic novels NIMONA and IN REAL LIFE, which ended in a tie. I didn’t anticipate that happening when Booketology started! Only one could progress, so in the end I referred to the ratings on GoodReads and Amazon, both which pushed NIMONA onto Round 2.

For most rounds, clear winners became apparent halfway through the matches, but this week there were several turnovers that lasted right up until the midnight voting deadline. The biggest victory was HEIST SOCIETY (82%) against THE CLOCKWORK SCARAB (18%). There were no ties this round, but it came close with the classics LITTLE WOMEN (52%) versus FAHRENHEIT 451 (48%), and romances THE FAULT IN OUR STARS (53%) versus ELEANOR & PARK (47%).

When favorites are up against each other, how do you choose? It was heartbreaking this round to see some of my favorites lose, even though other favorites won. The biggest win this round actually had the biggest win from all rounds. CINDER (89%) beat out THE FAULT IN OUR STARS (11%). By Friday, HEIST SOCIETY was beating LITTLE WOMEN by a single vote, but everything got tied up once again by the voting deadline. GoodReads and Amazon served as the tie breaker, and LITTLE WOMEN snuck by HEIST SOCIETY by a hair, making its way to the Final Four.

Ahh, the Final Four. HARRY POTTER (83%) easily beat LITTLE WOMEN (17%), and HUNGER GAMES (66%) had a comfortable lead above CINDER (34%), but only after the Teen Minecraft Club cast their votes. Until that point, CINDER barely had the upper hand.

The championship! HARRY POTTER (68%) had a pretty solid victory over HUNGER GAMES (32%), which didn’t entirely surprise me. Both are pretty iconic teen series, so I expected to see them against each other in the end, but HARRY POTTER has been around longer and had more time to ingrain itself into our lives. Personally, HARRY POTTER is the series that taught me to love reading.

Thanks to everyone who voted in Teen Booketology! As a librarian, I love to see what the favorite books in our community are. I must say, you have great taste!