Ever wonder how librarians hone their recommendation skills? Sometimes, our librarians play a game we call the 6 Degrees of reading. The rules are simple: choose six books, each connected somehow to the book above it, with the last book in the list connecting to the first. Periodically, we like the results enough to share them with you. So, with no further ado, we bring you 6 Degrees of Reading: Games and Globalization. 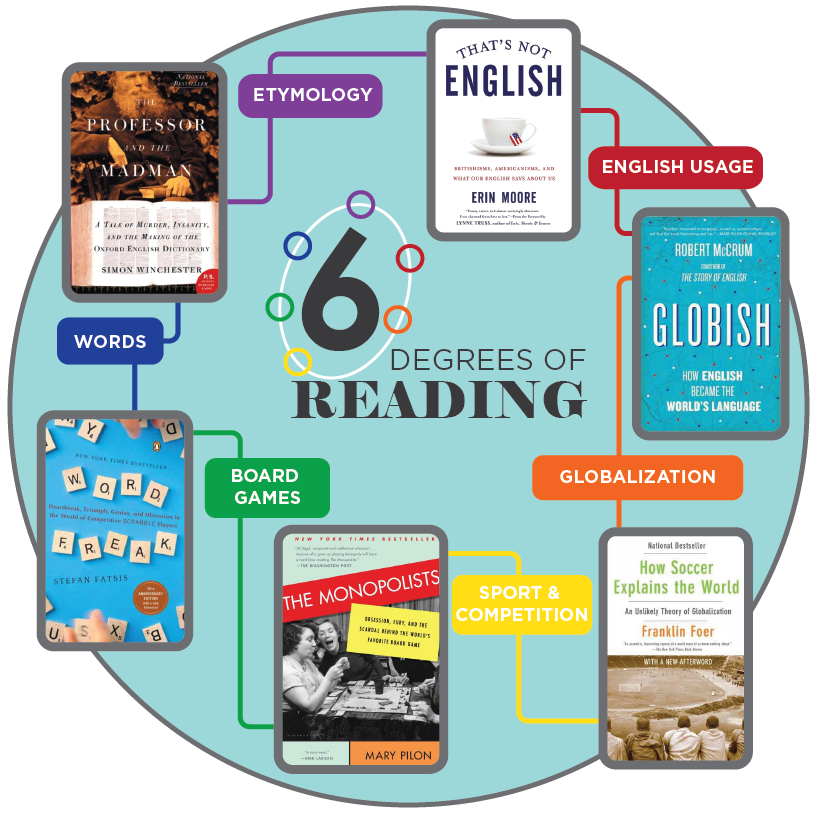 THAT’S NOT ENGLISH: BRITISHISMS, AMERICANISMS, AND WHAT OUR ENGLISH SAYS ABOUT US
by Erin Moore
(2015)

American by birth, author Erin Moore, now living in London with her Anglo-American husband, uses wit and humor to explore the historical and cultural differences of English language usage between Americans and British. Through several themed chapters on topics ranging from snacking habits to raising children, Moore explores the etymology of words on both sides of the pond and what these differences say about us.

GLOBISH: HOW THE ENGLISH LANGUAGE BECAME THE WORLD’S LANGUAGE
by Robert McCrum
(2010)

Robert McCrum discusses how English language usage has spread from Great Britain to everywhere on earth as he takes readers on a whirlwind tour of British and American history and their mark on the world up through modern times where people in Asia are racing to learn the English. In the 1980s, there was a fear that the English language would degenerate into a vast number of dialects. However, with the modern globalization of the world, English has not only avoided this fate, but grown to become the language of choice around the globe.

HOW SOCCER EXPLAINS THE WORLD: THE UNLIKELY THEORY OF GLOBALIZATION
by Franklin Foer
(2004)

Using soccer to show differences and commonalities, Foer reveals how the globalization of the world is simultaneously making everywhere more alike and more different as people seek to define themselves through their love of soccer. By examining the game, he focuses on understanding how international forces affect politics and life around the globe. Showing how in some places sport and competition can be used as a method to keep hatred, racism, or religious tolerance alive and in other places it is used as a modernizing force (such as in Iran where women forced police to allow them into a men’s-only stadium to celebrate a win for their national team).

THE MONOPOLISTS: OBSESSION, FURY, AND THE SCANDAL BEHIND THE WORLD'S FAVORITE BOARD GAME
by Mary Pilon
(2015)

Sport and competition have always resulted in high stakes. Look no further than Mary Pilon’s revealing book into the turbulent history of the Monopoly board game. Pilon reveals the Monopoly's interesting origins including the lost female originator of the game,  the Parker Brothers' attempts to blockade the development of other similar games, and the competitive rivalry between Parker Brothers and Milton Bradley. This is an interesting read about the origins of a beloved board game, the folk history surrounding it, and the corporate greed that made it into the iconic game it is today.

WORD FREAK looks into the world of extreme competitive Scrabble. What began for author Stefan Fatsis as a curious look at the sport for a journal article quickly turned into an obsession for the board game that converted him from a “living room player” into actually competing along with the world’s best players. The book humorously portrays the irreverent crowd that competes at this level and mixes in historical facts about the board game. Fatsis also explains how players must be able to memorize words well above what one would use in normal language usage. This is a provocative look at the world of games and the way the mind works with words.

THE PROFESSOR AND THE MADMAN: A TALE OF MURDER, INSANITY, AND THE MAKING OF THE OXFORD ENGLISH DICTIONARY
by Simon Winchester
(1998)

The fascinating look into how a madman and murderer submitted over ten thousand definitions of words for the first Oxford English Dictionary. Genius Dr. W.C. Minor was diagnosed with schizophrenia after his experiences in the American Civil War. After traveling to London where he killed a man and was sent to an insane asylum, Minor came across a leaflet asking for volunteers to help compile a history of the English language. Minor wrote to the editor and offered his services while remaining vague about his circumstances. Author Simon Winchester not only chronicles this interesting man but also the momentous effort it took to build the Oxford English Dictionary as a way to help document the etymology of words in the English language.