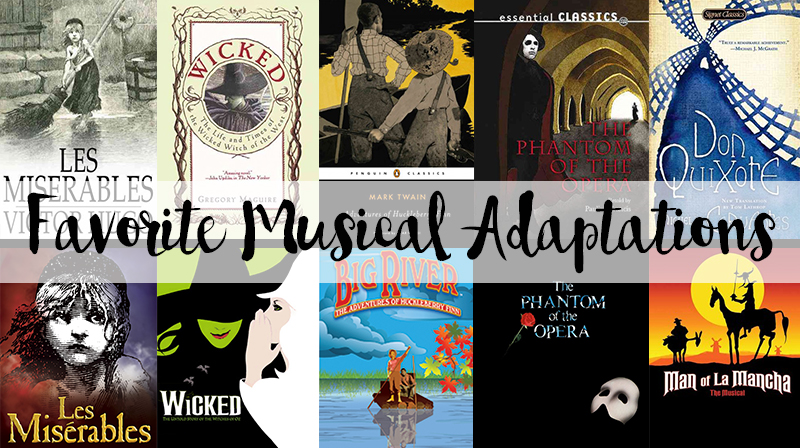 Two hundred and fourteen years ago today, on February 26th 1802, Victor Hugo was born.  To celebrate his birthday, I thought a list of my favorite musicals inspired by novels would be appropriate.  I’ll admit that there was a bit of a battle and some of my favorite musicals didn’t make my list.  But here are what I consider Broadway’s best interpretations of some fantastic books!

Victor Hugo’s masterpiece tells of ex-convict Jean Valjean, who overcomes much to become a community pillar only to discover how hard it can be to escape your past.  I am constantly amazed at how well the music and lyrics capture a very complicated story. And the upshot of watching the musical over reading the book is you don’t have to sludge through the 50 pages Hugo spends describing the Paris sewers.  That said, everyone should still read the unabridged version at least once in their lives because it really is just that good.

I read WICKED by Gregory Maguire before there was a musical.  A while later a friend went to New York and returned raving about the amazing musical she had just seen called WICKED. I was very surprised.  My first question was “Did it end happily?” She said it did and I knew they had changed a lot while adapting that book for the stage.  I believe the book has some good parts and the concept itself is brilliant.  But I usually recommend people just enjoy the musical and leave the book on the shelf.  Does that make me a bad librarian?

BIG RIVER (THE ADVENTURES OF HUCKLEBERRY FINN)
by Mark Twain
(1884)

The sign of a great musical is one with music that doesn’t leave you.  It’s a musical where, days later, you are still humming its tunes and singing its lyrics. BIG RIVER does that to me.  Who doesn’t love a song about the virtues of hogs?  Or the “*&#  *$&% Government”? Or the desire to just fish or think about fishing all day long?  These songs just speak to my soul.  In all seriousness, I love the music in BIG RIVER.  It is fun and heartfelt.  Mark Twain probably deserves some of that credit for devising characters you just can’t help but love and a story that refuses to lose its relevance with age.

PHANTOM OF THE OPERA
by Gaston Leroux
(1909)

No list of great musicals would be complete without THE PHANTOM OF THE OPERA.  The musical does veer somewhat from the novel but not in ways that ever really bothered me.  The music is brilliant and the story has a little bit of something for everyone.  It has a little romance, a little adventure, a corpse hanging from the ceiling, and a deformed masked man obsessing over a pretty young girl.  Wonderful family entertainment!

I am just realizing that I have never read DON QUIXOTE and I’ve always wanted to.  In fact, I just put the downloadable audio version on hold…there are two people ahead of me.  I hope they hurry up and finish it.  MAN OF LA MANCHA is one of the first musicals I ever saw, so there is a special place in my heart for that old man and his quest.  But, I really do need to read the book.  I’ll let you know which I like better.