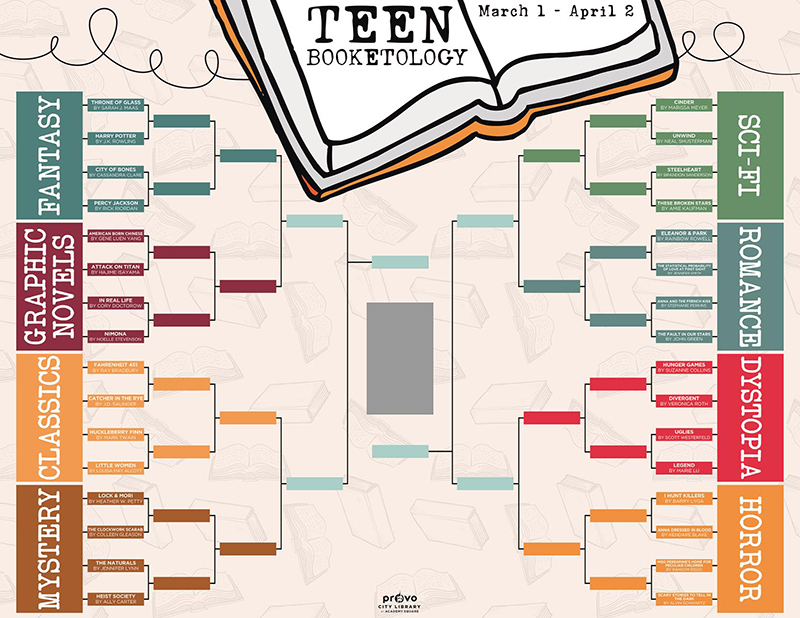 Welcome to March! I don’t know about you, but when March starts I can’t seem to stop hearing about March Madness. I enjoy a bit of basketball when I’m invested in one of the teams (I bleed blue), but that’s about it. I do enjoy tournaments though, and I love books, so I thought, let’s combine them!

I present to you, Teen Booketology! The teen reads equivalent of March Madness. We’ve selected some of the best and most popular teen books in eight different genres, and every week from March 1st to April 2nd you have the opportunity to vote for your favorites.

While these are teen books, everyone should vote for their favorites. During the tournament, voting will start each Tuesday at 12:00am and last until Saturday at 11:59pm. On Monday the winners will be recorded on a large poster in the Teen Corner, and also posted online.

Now, I have a confession. Deciding which books to include in the tournament was very subjective. You probably have a favorite that you thought should have been represented that wasn’t, and I realize that. We tried to choose popular books that represented their genre well, but fully realize that there are great books that aren’t as popular, and books that are extremely popular but aren’t as… umm... well written (not naming names, but I bet you can think of one). We tried to find a happy medium, but again, this is very subjective, so don’t hate us for not including your all-time favorite read.

So, who do you think will win? I have some guesses, but I want to know what you think.